Optical fiber is used abundantly in today’s advanced era of communication. High-speed internet calls for the use of a fiber-optic cable to transmit signals over long distances. By using fiber cables, the speed of the internet vastly increases while the chance of a lost signal significantly decreases. Fiber is also used in newer computers to help create efficient transmission and processing.

Recently, scientists from ITMO University have been working to create fiber on a microscale to keep up with the demand for smaller and thinner devices. This microscale fiber is known as micro waveguides. 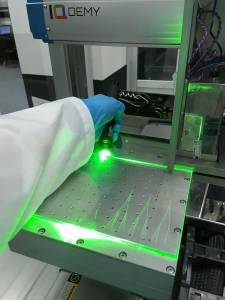 Waveguides have historically been created by laser ablation or photolithography, but these methods require complex equipment and a plethora of rare materials. Advancements in inkjet printing technology, however, have started changing the production of waveguides.

“It is obvious that the creation of elements of data storage and transmission of data based on the photons movement control is the basic technology for future computers. The most difficult part for the engineering of such devices is the creation of efficient signal transport lines. Our solution removes all the major limitations in this area, and I have no doubt that soon we will see photon computing devices with waveguides created with our method,” said Alexander Vinogradov, ITMO University Researcher.

The main benefits of inkjet printing micro waveguides are a quick turnaround time and the ability to print materials at an affordable price, unlike when waveguides are created through laser ablation or photolithography. By using a suspended solution composed of titanium dioxide particles, waveguides don’t need rare materials to be created, saving manufacturers a significant amount of money.

What the Future Holds for Inkjet Printing Micro Waveguides

5 Trends for Industrial Inkjet Printing in 2022